Much Ado About Nothing Review

So today I got the chance to see Much Ado About Nothing after having managed to snag a last minute ticket to an intimate screening at Cornerhouse. I went in with only a very vague idea of the plot as I never really got a chance to familiarise myself with any of Shakespeare's comedies except for A Midsummer Night's Dream, having only ever studied or read any of his tragedies in the past. As a result, I don't really have anything to compare this to other than what Joss Whedon has done in the past.

First and foremost, I found it extremely charming and quirky, something that the unusual choice of shooting in black and white does service to, giving a sense of whimsy and class to this modern retelling of Shakespeare's comedy classic. Apparently shot in just 12 days in between the shooting and post-production of last year's box office smashing superhero flic 'The Avengers' in Whedon's own Santa Monica home. Naturally both films are poles apart both stylistically and in subject matter, and despite the budget not yet having been revealed, I imagine it was fairly modest being as the story itself doesn't stray far from Leonato's (Clark Gregg) big house and grounds. That being said, it doesn't really feel like the kind of story that needs elaborate sets or costumes to pull it off, making it a stark contrast against the last classic adaptation I reviewed, Luhrmann's take on the Great Gatsby. 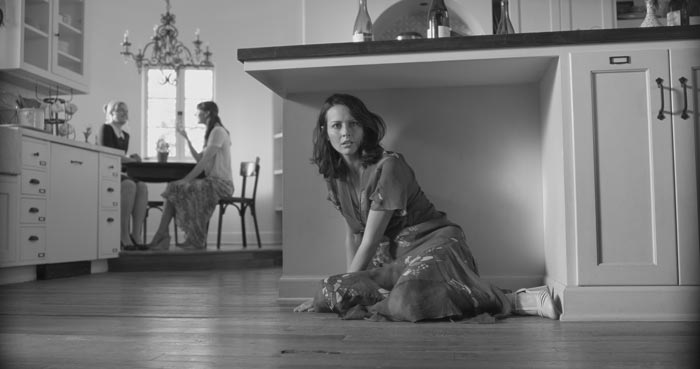 Its perhaps because of this coziness that Much Ado feels so natural and relaxed, free-flowing in a way that The Great Gatsby wasn't. However, it feels unfair to compare them both too much as both their stories and production values differ immensely. Though, as is evident in much of what Joss Whedon works on, he just seems to get drama and comedy in a way many filmmakers fail to grasp. With familiar faces from past television series he's worked on from the more well known Buffy the Vampire Slayer, to the perhaps lesser known Dollhouse and Firefly, the cast seem to encapsulate the kooky wit of Whedon's past projects from their expressive performances alone whilst reciting the refined poetic verses of Shakespeare's original play.

Performance-wise, I thought Alexis Denisof and Amy Acker both really stood out in their roles as Benedick and Beatrice, the two sharp-tongued lovers who's stubbornness and independence makes for clever dialogue and some pretty amusing interactions. Some of the most funny scenes, I found, were those in which both Beatrice and Benedick listen in on conversations set up between their friends in order to trick them into falling in love. I think Denisof brings a charismatic charm to the peculiar Benedick that makes his character really likeable. I was also impressed by Fran Kranz as Claudio, and was actually surprised he didn't get more screen time, though that might just be down to the script.
I found the scene with him in the pool with the martini glass that is pictured on the film's poster really striking visually, and just generally really enjoyed his character. I'd love to see Fran Kranz in more roles as I really like him as an actor and think its a shame he's so underused.

Also, lastly it was really great to hear Maurissa Tancharoen and Jed Whedon collaborating again, this time producing two songs that feature throughout key montages in the film. I think they have a really cool mellow style that suited the tone of the film. Overall, I really enjoyed Much Ado About Nothing and think it's a sleek, fun, Whedonesque take on a classic tale that manages to deliver clever humour in just the right doses. Definitely worth seeing if you're a fan of either Shakespeare or Joss Whedon, though it may leave something to be desired for those seeking more thrill and pomp, though I should imagine thats to be expected, its an adaptation of a 16th century play afterall. Still, perhaps I'm biast being a bit of a self-confessed Whedonite myself, but it managed to leave me with a newfangled interest in Shakespearean comedy nonetheless.