Jurassic Park IV: The Park is open! A 3D 'reboot' Extravaganza? + Opinions on The Justice League.

So I've been reading up on the recent news of the fourth Jurassic Park film thats been planned for 2015. Odd bits of news about it have been floating around for a while now, with actor Sam Neil who played Dr Alan Grant - the Indianna Jones of the Jurassic franchise - describing it as 'a big reboot, a total rejig', whilst also making it clear that he would have no further part in it. 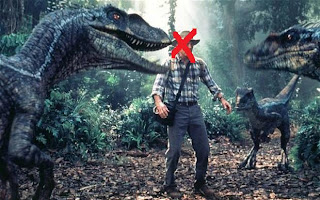 In this apparent 'reboot', Jurassic Park will have finally opened, and will apparently feature tamed t-rexes and velociraptors. I can't help but conjure up some really odd images in my head of how I imagine this will look. The velociraptors were the scariest part of JP, and a tamed t-rex? Even the t-rexes in The Land Before Time were baddies! Unsurprisingly it has been reported that it will be filmed and released in 3D, so I guess we have yet a few years until the so-called '3D Fad' dies down, especially as DC's Justice League film is set to be released in 2015 too, though with all the complications they face with regards to rebooting the Batman franchise, and the alleged end in partnership between Legendary and Warner Bros. as their contract comes to an end, it sure isn't looking like it'll be done by then, having hardly even begun yet with at least one of it's scripts already having been scrapped.

I'll admit I'm assured, as I truly believe that a Justice League film does not need to be made, at least not any time soon anyway and definitely not at the expense of rebooting the Batman franchise so soon after the last one has come to a close. Realistically, a film like The Justice League would be too difficult to pull off, especially not by 2015. I loved the style and tone of Nolan's Dark Knight Trilogy, but I just don't think the 'realistic, dark and gritty' approach would totally work for all the members of the Justice League. If done right, then maybe, just maybe a Justice League film could be utterly amazing. However the standard of Nolan's Batman franchise has set unbelievably high standards for any future DC Justice League member origin stories, and if done sloppily only to serve the purpose of a build up to a Justice League film like Marvel's Thor and Captain America films did, it could end up being very poor indeed.

Obviously DC will go ahead with their plans for the Justice League no matter what stands in their way, with their recent Superman reboot having already proved to be a box office success despite it's mixed reception. Money talks, and this success is the green light they needed in order to plan the rest of their build up to the biggest money-making venture of them all: A unified cinematic DC universe that could rival The Avengers.

But could a Justice League film really work on the same level as the Avengers did? The Green Lantern already proved that some of the members just might not be that bankable, and with the year of release being set for 2015, its starting to look like there just won't be enough time to develop the other members' origin stories in sufficient detail. So many problems are facing this film that my guess is it'll be pushed back even further, as right now it doesn't look like there is a solid plan in place at all, other than a big OK GO for future Superman sequels. Its looking like a 2015 release date was just overly wishful thinking, especially as no directors or script writers have yet been confirmed, let alone a cast of actors. At this point a 2016/2017 release date is looking more realistic as films like this take time. Who knows, maybe my pessimism will be thrown back in my face if the Justice League film does end up being a success? Though I don't suppose I'll be the only one holding my hands up...