Personal Update: Where I've been + Plans

Hey! So I thought I'd just post a quick update to apologize for my lack of activity on here! I actually forgot to mention that I was going away for two weeks to stay with my dad in France. So there's been that, and also the fact that only a day after my return I was preparing to go to Manchester MCM Expo.

Needless to say, its been a busy few days/weeks. While away I managed to get my hands on this year's Cannes film festival programs as well as some other film-ish goodies which made me very, very happy.

I also got around to seeing The Bling Ring, I'm still tweaking the review a bit now but expect to see it up soon. I'm still trying to get back into the swing of things a little bit after the two fantastic weeks I've spent in the sun. Admittedly it is a little disenchanting coming home to dull cloudy British weather. I'm guessing I missed out on the big 'heat wave' everyone was raving about while I was away?
Mainly I'm just trying to stay motivated as I have lots of projects on the go and it kind of feels like trying to balance a bunch of spinning plates; I can't stay too focused on one for too long or the others will topple! 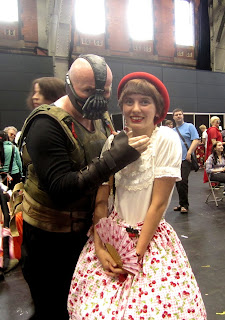 Still, I feel very lucky to have such a fantastic break, and Manchester MCM Expo was an exciting experience too, being my first convention. Despite having to queue with my friends for more than two hours to actually get in due to the amount of people that showed up, I had a great time overall. It was absoloutely worth it as I got to meet so many cool people in costume and ogle over loads of really cool, expensive merchandise. I got a brief glimpse of Warwick Davis too, so that was a nice surprise.

For now my main aim is just trying to get organized, as on top of all the projects I have on the go, a lot of big changes will be taking place for me soon. So overall, this is a busy, busy year for me!

In any case, for now the main thing is that everything will hopefully be back to normal soon, so expect more regular posts within the next few days!