In Sofia Coppola's most recent film based on true events, we follow a group of rich, fame-obsessed teenagers led by ring leader Rebecca (Katie Chang), as they track down the houses of famous names such as Paris Hilton, Rachel Bilson and Orlando Bloom in order to rob them of their luxurious possessions. 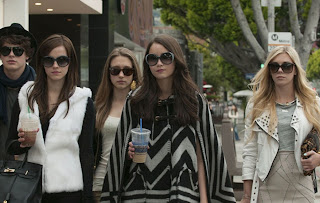 Capturing the essence of our times, The Bling Ring paints a shallow portrait of our generation in a loud, explosive fashion that won't fail to make an impact. From the utterly self-absorbed, faux-innocent air-head Nicki (Emma Watson) to self conscious 'new kid on the block' Marc (Israel Broussard) and his infatuation with Rebecca and her fearlessness driven by her obsession with A-list glamour, we are presented with uncanny caricatures of the people involved in this infamous crime.

The Bling Ring plays out like a collage of vivid memories, enhanced by the sensations of power and control that give these teens their illusions of grandeur and of being above and beyond the system, along with fast-paced snapshots as we scroll rapidly through their projected personas via social media. Aside from the group of wayward teens, technology is the main culprit of the tale. Facebook and Google become tools to bolster egos and track the whereabouts of their various celebrity victims, reminding us of the influence of both social and mainstream media in our times. The group document the fragments of their lives they want people to see, using their profiles to highlight their successes and mask their desperation.


In its quieter moments, Bling Ring gives us a glimpse of something more, revealing brief, fleeting moments of it's characters' vulnerability. Rarely does the film give us a chance to look beyond it's shallow exteriors and glamourous facades of materialistic desires. A scene in particular that stuck with me was the brief, but lingering moment in which ringleader Rebecca gloats over her reflection against the glaring vintage stagelights of Lindsay Lohan's vanity dressing table, immersing herself in the triumph of coming as close to her 'idol' as she ever will. Trying on her perfume as if to become her. Its the subtle moments such as this that really shone for me, and left me wanting to know more about who these characters really were as people, rather than as petty teenage criminals with a penchant for high end fashion. 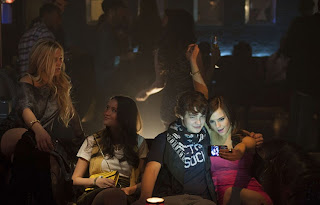 Unfortunately, these moments are few and far between, and for me this is where the Bling Ring is flawed. Despite it's wealth of visually stunning shots and a suitably energetic electro hop sound track, it fails to reach a satisfying level of emotional depth with regards to it's characters, and thus left me feeling like I still knew nothing about them. Sadly we only get a very superficial, one-sided view of them, and no inclusion whatsoever of the point of view of the celebrities that were robbed, something else that   could have been really interesting.

I also don't think the 'mockumentary' style of it aids the story in any way either, as despite giving the film a unique feel stylistically, it is something that again, only serves to alienate the characters further by presenting them predominantly within the context of their crimes and warped obsessions rather than as human beings with backstories. I feel like an opportunity was missed here to make a statement about celebrity culture and privacy boundaries, so ultimately, upon reflection was a little bit disappointed.

However, The Bling Ring is still worth seeing if not only to hear an improvement in Emma Watson's American accent, but for some really beautiful cinematography. There are also some great one-liners throughout the film, and the brief celebrity cameos are also pretty cool. You can't help but admire the fact that Paris Hilton took part despite how stupid and careless it makes her look. Otherwise, this film will elicit a variety of emotions and reactions, with a couple of pretty intense scenes, notably one involving the careless handling of a gun.

Overall, the Bling Ring is a film that pulses with energy and style, I only wish there was as much substance to match. Having seen lots of mixed reviews and opinions of this film, I think the general consensus is to see it and decide for yourself what you make of it. I personally don't feel its Coppola's best, though I very much enjoyed it nonetheless.