The year is 2154, Earth is polluted and over-populated and the wealthy live on a luxurious man-made space station known as 'Elysium'. Max (Matt Damon), an LA dwelling factory worker whose life's dream is to one day obtain a ticket there becomes the victim of a lethal dose of radiation whilst working at the factory, leaving him with but 5 days to live, wherein he agrees to take on a mission that could not only realize his dream, but ultimately change both places for the better.

Going in, I knew next to nothing about Elysium. I'm mostly glad I didn't as the initial concept of the plot seemed interesting at first, despite taking a turn for the predictable. Disappointingly, most of the film is spent on Earth, whilst Elysium feels as far away to the audience as it does to Max. I do wish we'd have been able to see more of Elysium, as what we did see of it looked amazing. A lot of the CG in this film merged really well with what was real, making the film more realistic in terms of visuals. The plot as a whole also weighs into the realism by presenting us with a scarily plausible vision of the future that showcases the issues of pollution and overpopulation responsible - issues that are just as prominent in society today.

Hand in hand with the aforementioned 'realism' comes the dirty, grimy feel of the film. Max's robotic exoskeleton being put together in a dimly lit, squalid basement, dirty factory overalls, grubby USB cables and machinery. All these things in stark contrast with the pristine touch screens and private med-pods of Elysium, which itself just looks like a massive floating holiday resort for rich white people. And yet, the contrast isn't jarring, as the fluidity of the effects are such that it all seems to merge together quite naturally, giving Elysium a different feel to other sci-fi films I've seen.

Matt Damon is quite good as Max and manages to earn the sympathy his character deserves considering most stuff doesn't really seem to go very well for him. Near the end I did sometimes wonder how he managed to sustain so many injuries without just dropping dead, or how his character was even holding out for so long at all, but then I just gave up as I realized that maybe I was delving a little bit too deep, or at least being too picky anyway. Jodie Foster was surprisingly wooden as Delacourt, the head of security on Elysium who's job it is to keep anyone without citizenship coming from the disease-ridden 'Third World Slum' the world has become, away from the elitist space station (Detecting the socio-political commentary yet?). I'm not sure if this was just me, but whenever she spoke, her lips looked out of sync with what she was saying, like she had been dubbed or something. It was pretty weird, as well as the fact that some of her lines were spoken in french. I didn't really understand the relevance of this, and it was never explained in any way. Maybe all rich people will speak french in 141 years time? I don't know. 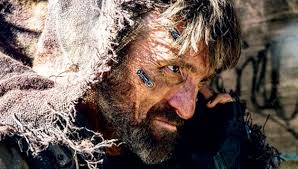 What I do know is that Foster's character wasn't nearly as menacing or villain-y as Sharlto Copley's character, Kruger. Introduced as Delacourt's hitman, Kruger is distrubingly evil and creepy. I personally didn't expect him to develop into such a major character, and I think he really does manage to steal the spotlight from Foster on the villain front. Also, there's a really cool scene in which he undergoes major facial reconstruction which is just so cool. It has to be said that the effects in this film really were amazing, but then you'd hope so with an estimated budget of 100,00,000 dollars. Really.

Overall I enjoyed Elysium, though it took me some time to warm to it. Its not the best sci-fi film I've seen in that it's pretty formulaic, and the second half in particular is pretty predictable, though its a good film nonetheless. My main problem with Elysium is that for all it's amazing visual effects and beautiful style, I feel it could have done so much more with the concept. Yes there's this underlying socio-political commentary of rich vs poor and equality and immigration and what have you, but on the surface there's this really amazing concept that just feels wasted by an ultimately pretty generic plot line. Basically I was more invested in the ins and outs of the concept than the story and its characters. Not that its characters were weak, just that they weren't interesting enough for me to really care all that much about them. Luckily the ending was strong enough to gear my interest back towards the characters in the final few scenes. Nevertheless, I couldn't stop thinking about the possiblities that a story of such an epic scale offered, leaving me feeling ever so slightly underwhelmed by the direction Elysium took in the end.