'This is what it's like living with a billionaire?'


Big, flashy and loud: the classic musical Annie is back on our screens after 15 years. But does it live up to the hype?

Short answer: No, it doesn't. The parody imitation of the traditional curly haired red-head we all know and love in the opening scene provides a self-aware and clever nod to any fan of the 80's original, as well as a glimpse to what feels like a promising opening. From the start we know the approach is going to be different, the opening credits pulsing with energy as we see Quvenzhané Wallis running and biking around modern day New York to a musical medley of all the time-honoured songs.

However, this remake feels too desperate to refresh and modernize a tale that doesn't need to be fixed. New songs are included, and small details are changed with no real justification, an aspect that may leave fans feeling cold. So focused is this film on getting down with the times, with its use of social media and smartphones ever present as a way of firmly anchoring this film in the 21st century, that it lacks credibility and heart.

Dripping with unshakeable optimism, despite all of its characters seemingly neurotic tendencies, the emotional core of this film is lost in the sheer spectacle of it all. It all seems painted with an exaggerated Hollywood sheen that only serves to stifle the emotional core of the story in favour of representing our fame obsessed, consumerist culture. The re-worked versions of the songs, while upbeat and spirited lack the heart of their original predecessors. Cameron Diaz's rendition as Miss Hannigan of 'Little Girls' in particular is as flat as her performance, meanwhile Jamie Foxx is charming yet for the most part rather dislikable as the Daddy Warbucks of film, renamed Will Stacks. The decision to make him an electoral candidate this time round somehow works, making his decision to foster Annie more believable, though also making his character harder to warm up to. Until the very end, him and Annie's relationship just didn't feel genuine. 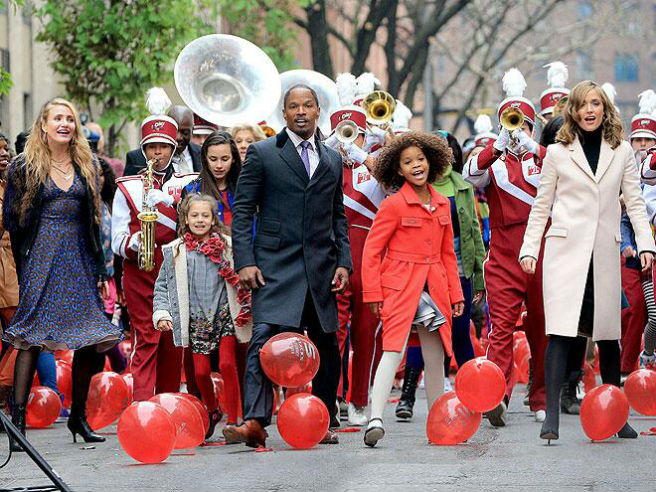 Despite it all, Quevenzhané really manages to stand out, working well with what she's given and giving the audience a fresh faced, sassy heroine to root for. It's only a shame that the rest of the film isn't on par with her performance.

Overall, the whole film felt hollow and disingenuous, with the glitz and glamour of Annie's child fame simply coming across as a cheesy, shallow mess that fails to reach any real emotional heights. If you're simply looking for a feel good film to catch over the festive season, then this film will probably give you what you're looking for in terms of spectacle. However, if you happen to be looking for a glimpse of the Annie of of 82', step away from this disappointing remake, because you're probably not gonna like it here...