Following the success of last year's adaptation of John Green's teen romance novel A Fault in Our Stars, comes Paper Towns, a run of the mill coming of age mystery-cum-road-trip flick.

The film focuses on protagonist Quentin 'Q' Jacobsen's (Nat Wolff) fascination and fixation with his neighbour and childhood friend, Margo Roth Spiegelman (Cara Delavingne). Many years have passed since their friendship first blossomed as kids, and they've grown apart, with Margo now the coolest, most aloof of popular girls at high school, who has a reputation for being quite a mystery. After years without contact, much to Q's surprise, Margo appears in his room one night, convincing him to take her out in his parents' car by promising him 'the best night of (his) life'.

What follows is a revenge mission carried out in various pranks to get back on her cheating ex-boyfriend, and dole out punishment to the people she feels have wronged her over her time at high school. The night ends on a strangely philosophical note, with Margo decrying the deceptive nature of their home town, as they look down upon it from a sky-rise. 'It's a paper town with paper people', she laments, almost poetically. With this, Q attempts to separate himself from this demographic by expressing his fondness for her, to which he is brushed off lightly, nowhere near as adventurous or spontaneous the type as would befit Margo's reputation, obviously.

So where does this leave us, and Q? Hopeful? Slightly perplexed? Well yes, because before the stereotypical teen love story has a chance to thrive after this unexpected night of reckless abandon, Margo is gone. Nowhere to be seen.

It's at this point that the movie that begins to fall a bit flat. Q's naive obsession with Margo, who whether intentionally or not manages to come across as quite a dislikeable character, seems unrealistic and far fetched. That he would spend so much time pursuing a girl who, until a few nights ago hadn't spoken to him in years, to the extent at which he'd be willing to sacrifice his high school prom experience with his REAL friends just doesn't ring true to life at all.

While it dips in the middle, Paper Towns' strongest part is easily its second half, as it works better as a road-trip movie than anything else. Most of the characters are very likeable, particularly Radar (Justice Smith) and his girlfriend Angela (Jaz Sinclair) who have the most natural chemistry in the entire film, despite their roles as secondary characters. Pretty-but-clever girl Lacey (Halston Sage) is charming and sweet, but feels very underdeveloped. She doesn't get to prove herself in any way, and simply goes around ensuring people she's cleverer than she looks in a half-assed attempt by writers to sum up her character and defy pre-conceived character expectations without really having to do anything.

Margo ends up being quite a controversial character by the end of the film in the way that she basically epitomizes the stereotypical 'manic pixie dream girl' of your classic romantic comedy, but this is then all pulled apart by the end and scrutinized as we realize that all these rumours and expectations of her are all just fabricated by people to fill in the gaps. Margo is just as much a 'paper girl' as she imagines everyone else in the town she lives in to be, if not more so because she perpetuates her prestige and allure by creating mysteries and leaving clues behind for Q and his friends to figure out.

Some of the scenes do feel a bit cheesy and staged, but there are also some really natural-feeling genuine moments scattered about too. Far too often, the film feels the need to explain itself and falls into the trap of being overly obvious where writing is concerned, to the point that some scenes could have so easily been made to feel more natural or free-flowing but just couldn't whilst being tied to this cookie-cutter template of a conventional teen drama in which we have our go-to custom characters (The Pretty One, The Funny One, The Nerd etc.) à la Breakfast Club. 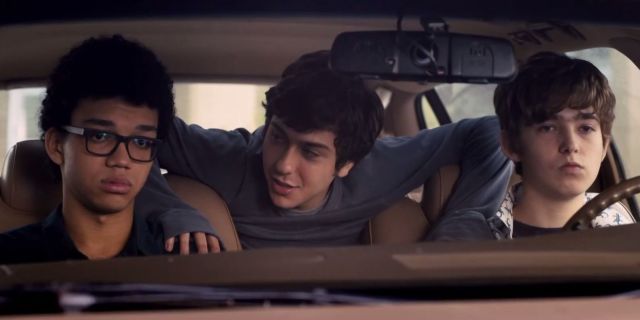 Whilst it has a hard time finding its feet, Paper Towns isn't a bad film, it just has difficulty bringing something new to the table with a concept that has been done before (500 Days of Summer nails the 'manic pixie dream girl' analysis to a T), but has enough quirks and funny moments of its own to not feel completely unoriginal. Most notably Radar's parents' collection of black Santas makes for a pretty unexpected and quirky addition.

Disappointingly, despite how neatly packaged the end appears, there doesn't seem to be sign of much character growth . You still get the impression that there's a lot of growing up still to do, particularly with Q, as by the end of the film he's still idolizing the idea of Margo, despite realizing how unfair it is to do so, and after delivering a pretty deep, introspective monologue about it. You kind of get the message they're trying to put across, it just doesn't come out as well as it could have. Unfortunately this is a sentiment that seems to echo throughout whole film. While it's enjoyable and good while it lasts, you might find yourself coming out with the feeling it just missed the mark and could have been just that little bit better.