'Never surrender. Never give up the fight.'

In Sarah Gavron's new social-justice drama, Carey Mulligan, Helena Bonham-Carter and Meryl Streep star as soldiers of the early feminist movement. The film's main focus is on Maud Watts (Mulligan). We see her life on the fringes of the story, and follow her as she progresses into becoming one such soldier. A hard-working yet reserved laundress, she gets caught up in the tense battle for women's rights being fought for by the Suffragettes, and is scrutinized by government security as a perceived threat along with her peers. Though hesitant at first, the chauvinism she faces both in her workplace, and even at home with her husband allows her to find courage to make a stand against the patriarchy with her fellow women. 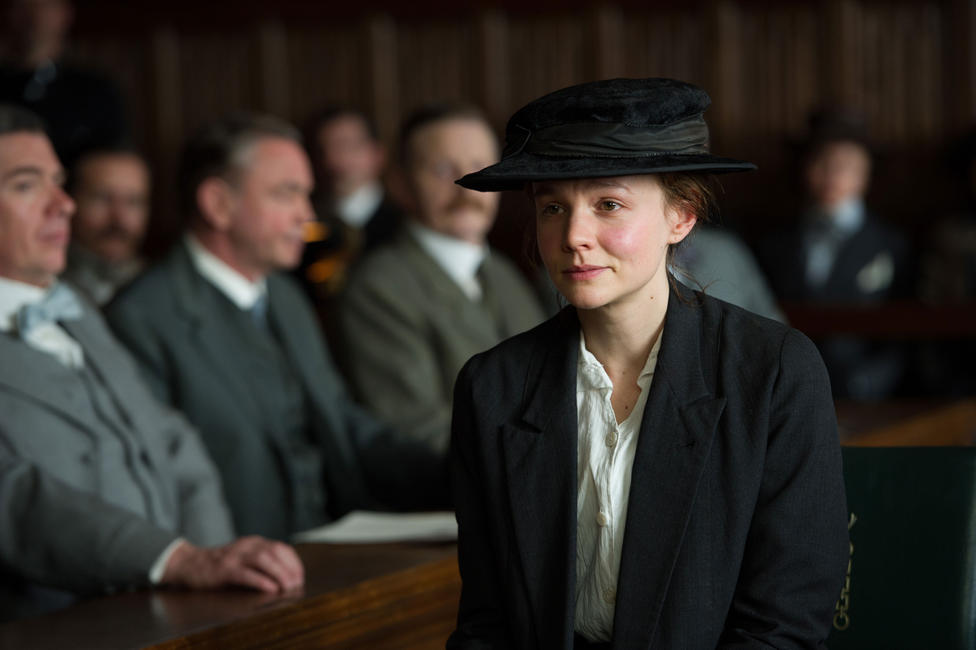 Much of the brutality and unfairness women faced at the time is accurately represented in Suffragette, with among the film's most harrowing scenes showing women in wide brimmed hats been beaten down in cobbled streets while politicians turn another cheek. Maud, weak and small in her dark cell, kicking and screaming as she is forcefully fed by prison guards, gagging painfully, choking down averse mouthfuls and spitting in protest. It doesn't always make for an easy watch, and it's made clear that with all the struggle these women faced, the end result was hard won.

The set and costume design are excellently constructed, adding to the film's authentic feel. However, the historical accuracy only extends so far. While aesthetically, the film oozes with gritty realism and a passion that will surely get its audience on board, it often does so in a very black and white manner. Apart from Maud's young son Adam, none of the male characters possess any redeemable qualities, and none of the women appear to question Ms Pankhurst's extremist tactics. There is a huge emphasis placed on 'deeds, not words', and The Suffragists, The Suffragettes' more peaceful, law-abiding counterpart aren't mentioned at all, despite the huge role they played in attaining the vote. So maybe watching women blow up post boxes and throw rocks at window displays is more cinematic than watching women sit indoors and aggressively write strongly worded letters, but the film's complete disregard for them felt bizarre.

Some of the character logic is also at times somewhat questionable. Maud' husband Sonny for example, played by a moustachioed Ben Whishaw, makes some pretty incredulous and harsh decisions, solely, it seems, for the sake of pushing the plot forward and advancing Maud's role within the movement. That being said, the acting here can't be faulted. Mulligan does an admirable job of breathing life into what would have otherwise been a lacklustre stock character. She is our guide through the gritty, working class London of the early 1900's. Meanwhile, Meryl Streep makes a fleeting but unforgettable cameo as Emmeline Pankhurst. However, by far the best in all of this is Bonham-Carter, having had her character's name changed from Catherine to Edith Ellyn in honour of real-life suffragette jiu-jitsu instructor Edith Garrud. It's said Garrud taught the suffragettes how to defend themselves against the police, and as Edith, Bonham-Carter's determination and fighting spirit are palpable, the sincerity of her performance radiating throughout. Given the subject matter, and the way modern feminism has fought its way to the forefront of many a socio-political debate, casual or otherwise, across the internet and in real-life amongst younger and older generations, it's a surprise this film wasn't made sooner. It's a solid film, and while it could be shorter, it fulfils its role in educating a contemporary audience of the hardships women faced in this period, one that is often ignored throughout cinema.

Overall, Suffragette has a strong cast, a clear emotional core and shows the motivations people have for social justice, as well as the sacrifices they are capable of making in the face of barbarism. It also clearly makes a point of how even the most ordinary working class woman can make a difference fighting for what she believes in. It's not flashy, and maybe that's the point, but it's nothing spectacular either. It ticks all the boxes needed to be an Oscar contender, and it would come as no surprise if a few months down the line this picked up a few nominations. Depiction of real events, check. Period reconstruction, check. It tells an important story, albeit plainly and simply, but it does its job, it just doesn't manage to shine. For all the intensity it offers, its quieter moments just don't go down as well. Also, its lack of exploration with regards to the moral dilemmas and complexities of Pankhurst's methods just don't sit right. It feels a little too clean cut at times. Had Gavron not decided to so unreservedly paint all men as an antagonizing force, it could have been a much more interesting watch. As it is, it feels a little too forgettable.