'My Parents asked if their grandchildren could visit them for a week.'

Aspiring film-maker Becca (Olivia DeJonge) and her brother Tyler (Ed Oxenbould) go to visit their Grandparents for the first time in the hopes of resolving things between them and their mother, while documenting their stay. While things start off relatively normally, it's not long before they both realise that something is very wrong.

While it may be disappointing at first to learn that this is yet another found footage horror film, it'll also come as a surprise that for the most part, it's done pretty well. Of course there are still some exceptions throughout. However, Shyamalan takes advantage of his teen film-maker's desire for filmic perfection as a means of justifying some beautiful shots within the film, that add a serenity and variety of pace that other found footage flicks can't rationalize, as well as some refreshingly on the nose wit. Gimmicks there most certainly are, but far less than in your average film of this genre or format. The film has no music or unnecessary sound effects. Save for one song used at the end, everything else we hear is what the characters also hear, as it should be.

It all plays out as though we're watching Becca's amateur film back. She serves as an ironic imitation of Shyamalan himself, his seriousness and his film-making style mocked playfully through her. As she explains technical terms like 'Mise en scene' to her brother, and assures him that if they let an old garden swing back and forth 'organically', it'll make for a better shot and ambiance, we're reminded how much more light-hearted The Visit is than Shyamalan's other films. It's a comedic parody disguised and packaged as a humdrum throw-away horror film, and given Shyamalan's back-catalogue of late, the humour is quite refreshing. 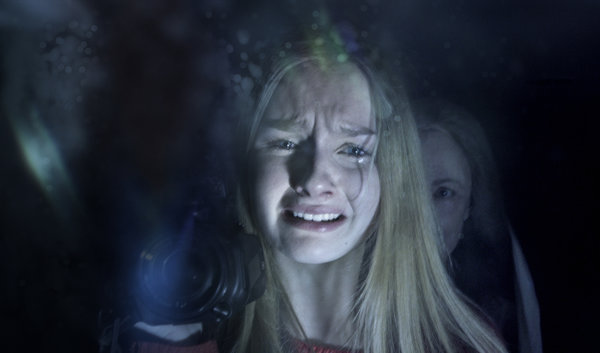 That's not to say it's all just a big mockery, on the contrary, it balances itself out by instilling enough drama and unsettling scares to keep its audience intrigued until the end. The relationship between the kids' mother (Kathryn Hahn) and their Grandparents instils an unexpected weightiness to the narrative that by no means holds it down, but allows for some excellent scenes. Deanna Dunagan delivers dramatic tension and an especially wide-ranging performance as the seemingly sweet Nana. Suffering from a psychological condition called 'Sundowning', she turns into a metaphorical 'werewolf' every night after 9:30pm, pacing around and disrupting the house maniacally in some sort of psychotic trance. She puts in an excellent and believably dual-natured performance that makes for some eerily unsettling scenes.

Due to the point of view from which this story is told, much of this madness plays for comedy. For two young kids, seeing their grandmother (who by the way, they've just met) incessantly scratch at walls in the nude and pace around making strange noises is going to be pretty weird and awkward to witness. Like the kids, you find yourself in an unwieldy position wherein you can't decide whether laughing would be an appropriate course of action or not. The Visit manages to toe the line between being mildly funny, but also quite disturbing. This sense of both dread and confusion is captured perfectly by Becca and Tyler's reactions, and made to feel very realistic.

All the while, Shyamalan uses the humour peppered throughout to his advantage, encouraging the audience to get in on it too. Probably the best thing about The Visit is the fact that it doesn't ask to be taken seriously, and it manages to be so self-aware. Shyamalan isn't ashamed to let us in on the fact that what we're seeing is strange, but that there's some also humour in it.

Naturally The Visit isn't without its faults, with aspects that don't work as well, like the cheesy feel Tyler's sense of humour sometimes gives off, and the occasional cheap found-footage gimmick. Probably his best film since The Village,  it's by no means Shyamalan's best, but after his more recent stuff, it's in no way his worst. Could this be the beginning of a comeback for Shyamalan? Only time will tell.