'What if the computer was a beautiful object? Something you wanted to look at and have in your home. And what if instead of it being in the right hands, it was in everyone's hands?'


An insight into Apple's digital innovations and the unbending, decisive force of the man behind them, Steve Jobs paints a rigid portrait of one of the 21st Century's most influential figures. With Danny Boyle - known for his colourful, dynamic style - directing, and Aaron Sorkin on board for the screenplay, not to mention a promising cast, this whole project should amount to both critical and financial success, right? Wrong, with it being reported that shortly after it's wider release in the US, the film was dropped by over 2,000 cinemas across America. But why? Wasn't it meant to do well?

The film unfolds in three 40 minute acts, each set on the brink of notable product launches: the first being the unveiling of the Macintosh in 1984; the second, Jobs' NeXTcube; lastly, the cutting edge translucent iMac in 1998. The first act in particular is deeply engaging, with Sorkin's rapid-fire dialogue presenting us with an extremely driven, emotionally detached business man, akin to the way in which Sorkin wrote Mark Zuckerberg in The Social Network. The difference here is that while Fincher's take on the budding facebook mogul focused rather more fittingly on friendships, Boyle and Sorkin's three-act backstage melodrama spotlights partnerships and responsibilities. Whether it's Jobs' (Michael Fassbender) and Wozniak's (Seth Rogan) fractured friendship, his co-operation with Apple's chief executive officer John Sculley (Jeff Daniels), his alliance with marketing executive Joanna Hoffman (Kate Winslet), or his irreparably damaged relationship with Chrisann Brennan (Katherine Waterston) - we see it all. 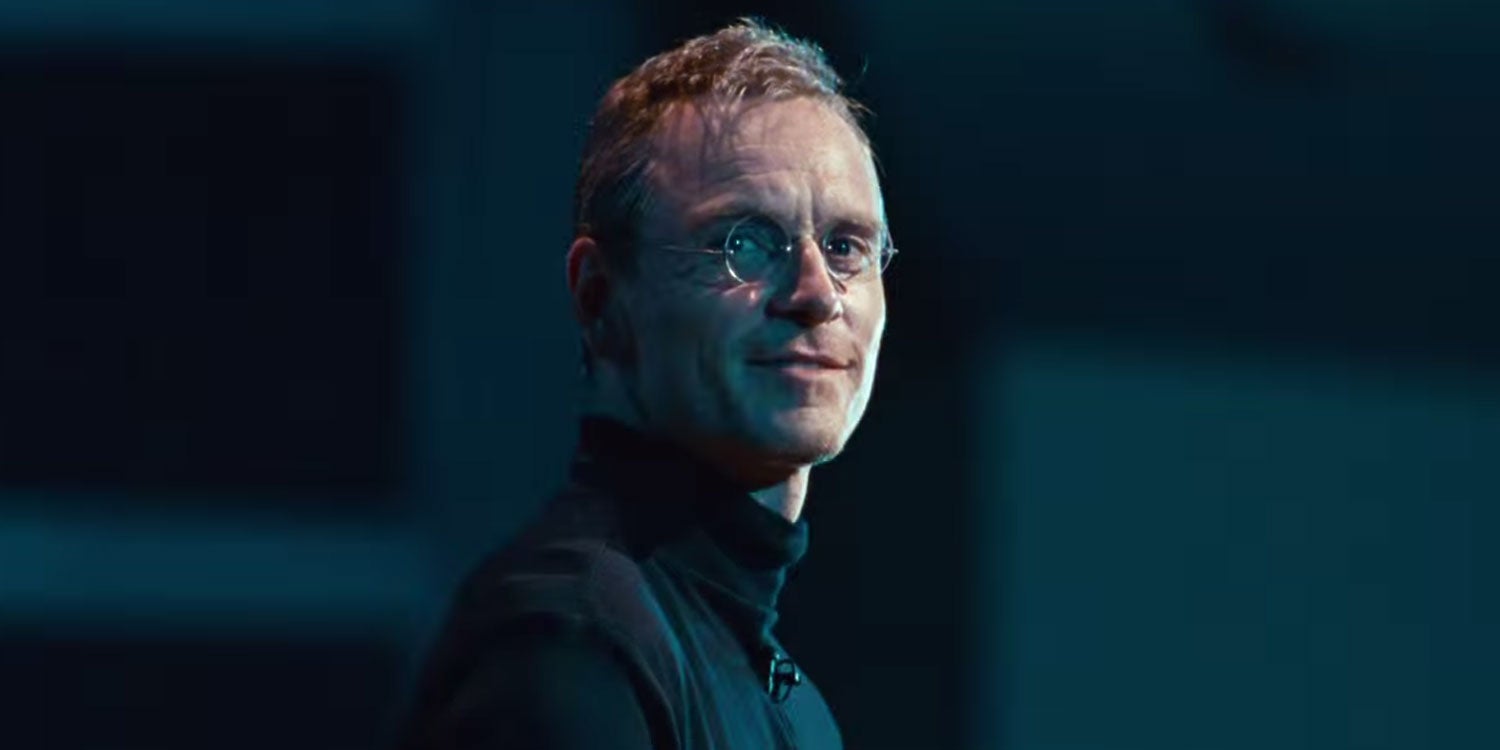 Now, Sorkin is often criticized for making all his characters sound the same, and while that could be applied here to some degree, it's the actors in this film that really breathe life into their characters. In the typical style of a film scripted with such energy and focus, none of the characters miss a beat, and although their immediate, quick-fire responses do at times feel a little too well-orchestrated, it could be argued that this also fits the pacing and high-stress environments in which the film is set. Tension rises, lines ooze with wit and snap out cooly while inducing playfulness here and there, but it's the cast itself that pull off performances strong enough to stir some humanity out of these words.

''It's warm and inviting and it needs to say HELLO!'',explains Jobs about the Macintosh to a frazzled Andy Hertzfeld (Michael Stuhlbarg), the computer scientist saddled with the immense task of making a prototype greet its audience amicably in a very short allotment of time. Funnily enough, warm and inviting are not at all words you'll think of while watching Fassbender as Jobs in this film, but if he manages to glean even an ounce of sympathy from the audience, it'll be through his acting rather than the writing. Fassbender embodies this frosty, highly focused, no nonsense individual with ease, but also manages to convince us that there is a beating heart behind his cold, intellectual but ultimately big-headed exterior. Winslet also pulls off her role as Jobs' assistant-cum-surrogate mother extremely well. Acting as his super-ego and voice of reason, she is widely known as 'one of the few who could successfully engage with Jobs', and boy does she do it, albeit with a slightly iffy Polish accent. 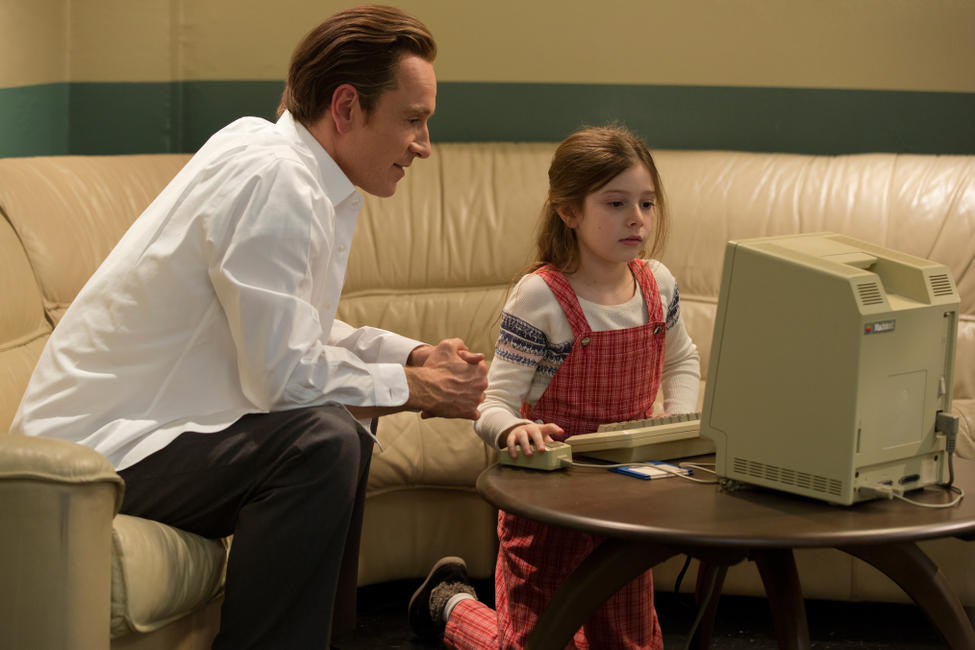 Seth Rogen once again proves himself dramatically in a serious role as Steve Wozniac, though one of the most underused and perhaps under appreciated performances in this film comes from Katherine Waterston as the discontented mother of Jobs' daughter Lisa. You really feel the frustration she experiences as she puts all her energy into being the single mother to a child who's father refuses to admit paternity for. What's even more intriguing is the relationship that blossoms between Lisa and her father, despite the troubles and disagreements they've faced. However, it does feel a little too neatly tied up by the end. But hey, this is Hollywood.

The film powers forward through 122 minutes of drama uniquely confined to corridors, theatre halls and conference rooms, the emotional energy bouncing from wall to wall of each set, intensifying the immediacy of it all. Alwin H. Küchler's precise and enigmatic cinematography vitalises the film aesthetically, but whether what the film does will hold audiences' attention enough is a different matter. It's extremely clean-cut, and while technically, it's a fantastic piece of cinema, aspects of it feel a little contrived.

It may be a case of 'too much, too soon', with Jobs, a biopic starring Ashton Kutcher having already been released in 2013. This is a far better film than the former, but maybe it could be that it was just released too early? Would it have not been more interesting to let the buzz around his name die down over a few years, and let Apple innovate further as a company before praising them on an achievement that happened less than 20 years ago? Maybe it's been the rush to dramatise the life of the hippy genius that compromised Steve Jobs position at the box office, or maybe as Boyle suggests, a poor release strategy. Regardless, what matters now it's out is whether or not the Academy will care. If this film can be sure of anything, it'll be getting nods at next year's Oscar ceremony.